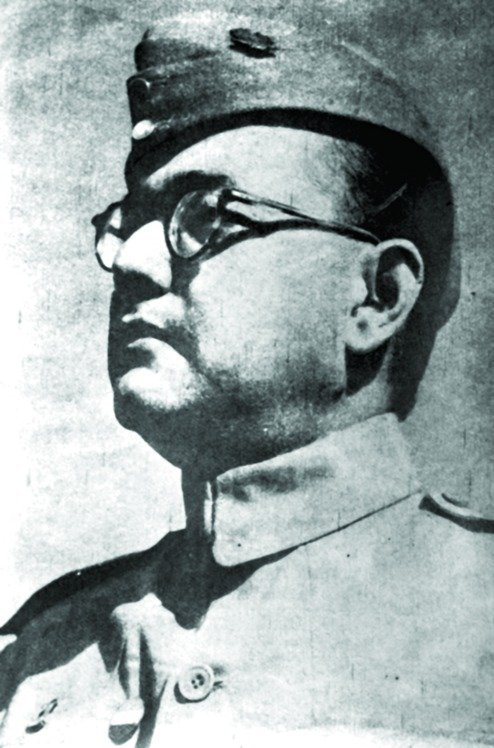 Subhash Chandra Bose, popularly known as ?Netaji?,
a great militant, freedom fighter and patriot was born at Cuttack, Orissa on
January 23, 1897 to Janakinath Bose and Prabhavati Devi. Janakinath was a well-
known lawyer. Prabhavati Devi was a religious and God-fearing woman. Subhash
Chandra was a brilliant student from the very beginning and was first in the
merit list of successful students in the matriculation examination.

Bose did his graduation from Presidency College,
Kolkata. He went to England in September 1919 for higher studies. He was
selected for the Indian Civil Service but returned to India without completing
his training to take part in the freedom struggle.The Jallianwallah Bagh
Massacre moved and disturbed him, too much. Under the deep influence of Mahatma
Gandhi, he joined the Indian National Congress. He was very much impressed by
Deshbandhu Chittaranjan Das and began to regard him as his political guru and
guide.Subhash Chandra was arrested several times, for example, he was arrested
in Kolkata in December 1921 when he joined the boycott of Prince of Wales?
visit. He was again arrested in October, 1924 and sent into prison at Mandalay
Jail in Burma (Myanmar). Later he became the Mayor of Kolkata.Subhash Chandra
was elected President of the Indian National Congress in 1938. He was again
made its President the next year. At this juncture he formed his own party the
Forward Block in 1939 because of his differences with Mahatma Gandhi and other
Congress leaders.

Subhash Chandra launched an all-India anti-British
Campaign in September, 1939. He was arrested in July, 1940. Later he was put
under house-arrest, but then he disappeared in the guise of a Pa than and
reached Berlin, Germany in November, 1941.He reached Malaya and established
Indian National Army (INA) or Azad Hind Fauz by recruiting Indian prisoners of
war. In June, 1943, he visited Japan to have support of the Japanese government
in the freedom struggle of India. On October 21, 1943, he became the commander
of the Indian National Army in Singapore and began his military struggle
against the British. He also established the Provisional Government of Free
India there. In December, 1943 he occupied Andaman and Nicobar Islands.In
December 1944 the Indian National Army crossed the Burma-India Border and
reached Kohima and then Imphal. But the surrender of the Japanese forced him to
withdraw and call off the war. It is believed that he lost his life in a
plane-crash on August 18, 1945 at the Taihoku airport, Formosa.Subhash Chandra
was one of the greatest freedom-fighters and patriots and the Pride of Bengal.
He became a legend in his life-time as a great leader, fiery orator and organiser.
He was sent to prison eleven times during 1920-1941.

Subhash Chandra favoured complete freedom of India
at the earliest while the Congress was in favour of freedom in phases in the
beginning. He was also against India?s joining the Second World War as an ally
of the British.This led to differences with Gandhiji, and so he resigned from
the President-ship of the Congress and set up the Forward Block. After his
mysterious disappearance from his house, where he was under arrest, he appeared
in Kabul and again disappeared until he surfaced in Germany. From there he
started publishing and broadcasting on air to help the struggle for freedom.He
was promised help in his armed struggle by Germany. Then he travelled to Japan
facing all the dangers posed by the Second World War. He became the commander
of the Indian National Army and freed the islands of Andaman and Nicobar and
renamed them as Swaraj and Saheed Islands.?Delhi Chalo? (March Delhi) becomes
the battle cry of the Indian National Army and they were soon across the Indian
border in Manipur but then the bombing of Hiroshima and Nagasaki and the
surrender of the Japanese army changed the whole course of events. Therefore,
he decided to return to Tokyo to decide his further course of action, but
unfortunately, his plane crashed near Taipei and he achieved martyrdom at the
young age of 48 years. But the country took the news of his death with
disbelief and still there are thousands and thousands of Indians who believe
that he is alive.

Subhash was a great adventurer as
well. His military exploits, unmatched patriotism and exemplary bravery have
made him a role model for the young men and women of India. He still lives
within our hearts and minds and works as a leading light and source of
inspiration. Had he been alive today, he would have given a new orientation and
turn to our political and social life with his so charismatic personality and
high sense of patriotism. After the defeat of Japan, Netaji wanted the help of
Soviet Russia in his armed struggle against the English.Subhash Chandra knew
very well that Russia cannot remain a friend of the allied countries for a long
time. Later we saw it and there developed a cold war between Russia and the
Western Powers. Besides forming a formidable army called Indian National Army
of 40,000 soldiers, he had also set up Azad Hind Bank in Rangoon with an
initial capital of $ 50 million.Before he withdrew from the eastern borders of
India due to unavoidable circumstances, he had actually occupied and freed more
than 1500 sq. miles of the Indian Territory from the British. He had many close
associates like Ras Bihari Bose, Shahnawaz Khan Etc. Besides Chittaranjan Das,
he was also influenced by Bai Gangadhar Tilak.?By freedom I mean all-round
freedom, i.e. freedom for the individual as well as for the society; freedom
for the rich as well as for the poor; freedom for men as well as for women;
freedom for all individuals and for all classes.?